Mpumalanga comprises almost 80 000 square kilometres of diverse landscape. The province is cut in two by the wall-like scarp of the Transvaal Drakensberg, which separates the interior plateau or highveld from the low-lying subtropical lowveld that stretches to the Indian Ocean. It is further incised by a number of rivers that feed into two main systems, the Olifants and the Komati. This rich landscape has provided resources for utilisation and exploitation by humans and their predecessors for more than 1.7 million years which has left countless sites for archaeology in Mpumalanga.

Recent Archaeology News broadcasted that Archaeological research carried out over a period of approximately 70 years has shed light on various aspects of this extensive past, from the Earlier Stone Age to the Late Iron Age. These studies of archaeology in Mpumalanga have focused on a range of topics from early subsistence strategies to farming, settlement, and mining. This chapter highlights some of the important archaeological sites and discoveries, beginning with the oldest period, which is referred to by archaeologist as the Earlier Stone Age (ESA). Although, this early period has yet to be thoroughly researched in Mpumalanga, the artefacts that have been documented allow discussion based on more substantial finds and interpretation from elsewhere in South Africa and Africa. This is then followed by a discussion of the Middle and Later Stone Ages and the Iron Age of Mpumalanga.

Get stuck into archaeology in Mpumalanga

Some of the biggest sites of archaeology in Mpumalanga which has made Archaeology News can be found in the Komati Gorge village which was nestled on a gently sloping hill overlooking the Komati River. The village comprised of 125 homesteads marked by stone-walled cattle enclosures linked to the valley through roads. Read more by clicking on the link below:

In South Africa, the ESA dates from about 2 million to 250 000 years ago, from the early to middle Pleistocene. Over this time, the archaeology in Mpumalanga has shown, as our early ancestors advanced physically, mentally and socially they invented stone and bone tools and learned to control fire and exploit natural resources effectively and these discoveries also made Archaeology News. As many of the bones found in association with early tools bear cut marks, scientists have inferred that early hominids were chipping flakes off cobbles in order to create a sharp edge with which to cut meat from animal carcasses. It would seem that these early stone tools helped early hominids to access a high-protein food source in sufficient quantity to develop their brains – the brain being metabolically the most expensive organ in the body.

This earliest stone tool industry is called the Oldowan, after Olduvai Gorge in Tanzania where the tools and their importance to hominid development were first recognised by Mary Leakey in the 1960s. To date Oldowan tools have only been found in Africa as know through Archaeology News. This early technology is fairly consistent across Africa, in that the tools are mainly simple flakes struck from cobbles, a technology that appears to have been sufficient to meet the needs of early hominids as it persisted for a long time. At sites like Olduvai Gorge and Koobi Fora in Kenya, Oldowan tools remained unchanged until about 1,5 million years ago. Oldowan technology thus represents a long period of successful adaptation, which lasted for almost a million years.

About 1.7 million years ago, archaeology in Mpumalanga and various other sites revealed that more specialised tools appeared, developing first in Africa then spreading to Asia and Europe through the movement of hominids out of Africa. These core tools, which are known as Acheulean tools after the French site, Saint Acheul, where they were first discovered in the 1800s, were intentionally designed to have sharper and straighter edges and studies suggest they were used to carry out a range of activities including butchering animals, chopping wood, digging up roots and cracking bone. Interestingly, even though the tools were named after a French site, they only appeared in Europe about 500 000 years ago.

The hominid species Homo ergaster has been credited with the manufacture of the Acheulean tools in South Africa. Compared with earlier hominids, Homo ergaster was physically almost like us; it had a larger brain and was relatively modern in face, body proportion and height. In fact, it had a body very much like our own. Homo ergaster ranged over vast areas of territory and occupied a variety of habitats, including drier, more open grassland settings. Most importantly, Homo ergaster became more dependent on tools; they became habitual tool users which also made Archaeology News. Oldowan and Acheulean tools are widely distributed across South Africa, where they are most commonly found in association with water sources such as lakes and rivers.
Unfortunately, because of this there are very few sites where the tools are found in a primary context, that is, exactly where the user left them; most of the tools have either been washed into caves or eroded out of riverbanks and washed down rivers. An example of this is the site of Maleoskop on the farm Rietkloof, one of only a few places of archaeology in Mpumalanga where ESA artefacts have been found to date. This area is drained by the Olifant River, which is fed by numerous tributaries, of which the Rietspruit is one. Erosion gullies along the Rietspruit revealed concentrations of ESA stone tools. These stone tools consisted of choppers (Olduwan), hand axes, and cleavers (Acheulean).

According to Archaeology News, by 250 000 the large hand axes and cleavers of the Earlier Stone Age had begun to diminish in numbers, and our ancestors started to employ a different technique in order to produce a greater variety of tools of diverse shapes and sizes. This change in technology marks the beginning of the Middle Stone Age (MSA). MSA tools are generally smaller, and, unlike ESA tools, which were produced by removing flakes, MSA tools were the flakes. These flakes were of a predetermined size and shape and were produced by preparing the core and striking the flake off.
As the archaeology in Mpumalanga and elsewhere have determined, long, parallel-sided blades, as well as triangular flakes, were commonly produced. The hafting of stone tools onto bone or wood to produce spears, knives or axes also became popular during the MSA, which reflected a shift from scavenging to spear hunting. During the MSA early humans still settled along or near water sources, but also took shelter in caves. Importantly, the MSA marks the transition from a more archaic Homo to anatomically modern humans, Homo sapiens. With this physical development, the first signs of art, decoration and symbolism began to emerge.

Although the MSA has not been extensively studied through archaeology in Mpumalanga, evidence for this period has been excavated from Bushman Rock Shelter (BRS), a well-known site situated on the farm Klipfonteinhoek in the Ohrigstad District. This cave, which formed in the Malmani dolomites, was excavated twice during the 1960s, first by Louw and later by Eloff. Archaeology in Mpumalanga showed the MSA layers indicated that the cave was repeatedly visited over a long period, the lower layers dated to more than 40 000 years ago, with those above dating to 27 000BP.

The Later Stone Age (LSA), which occurred from about 20 000 years ago, is signaled by a series of technological innovations and social transformations within these early hunter-gatherer societies as determined by archaeology in Mpumalanga and other sites around the world. With growing popularity, Archaeology News broadcasted that the hunting apparatus now included two important innovations, the bow and the link shaft arrow.
Link-shaft arrows were constructed with a poisoned bone tip, a link and shaft that fell away on impact, leaving the poison tip embedded in the animal. Other innovations included bored stones, used as digging-stick weights to aid in uprooting tubers and roots; small stone tools, often less than 25 mm in length, used for cutting meat and scraping hides; polished bone tools such as needles; twine made from plant fibre or leather; tortoiseshell bowls; fishing equipment, including hooks and sinkers; bone tools with decoration; high frequencies of ostrich eggshell beads and an increase in ornaments and artwork.

At Bushman Rock Shelter the LSA begins at ~12 000BP but lasted for only 3 000 years. During this period, archaeology in Mpumalanga and all over discovered that there were two stages of development. In the early phase, there were few stone tools but many bone tools that were fashioned into points, link-shafts and a wide range of scrapers. The second and later phase yielded few bone tools, but more stone tools. In Stone Age research, this LSA period is considered important because it marks the transition, in geological terms, from the Pleistocene to the Holocene, which was accompanied by a gradual shift from cooler to warmer temperatures.
This amelioration in temperature would have had the greatest impact on the higher lying areas of the country. Typically at this time both BRS and a nearby site, Heuningneskrans, showed an increase in the use of plant food and a greater variety of fruiting species. BRS also provided evidence of the seasonal use of plant foods. Marula fruit and nuts and Hypoxis corms were eaten when available. From the faunal remains it would appear that the LSA hunter-gatherers trapped, hunted and snared zebra, warthog and bovids (buck) of various sizes, and gathered tortoises and land snails (achatina sp) in large quantities. The land snail is particularly rich in protein.

There appears to be a gap in the LSA record of archaeology in Mpumalanga between 9 000 BP and 5 000 BP. This may have to do with the general dearth of Stone Age research in the province and as Archaeology News explained, it also encompasses a period of rapid warming and major climate fluctuation, which may have forced people to seek out more protected and viable environments in this area.

We pick up the Mpumalanga Stone Age record again in the mid-Holocene at the farm Honingklip (HKLP) near Badplaas in the Carolina District. Here two LSA sites were found on opposite sides of a bend in the Nhlazatshe River, about 1km west of its confluence with the Teespruit. The HKLP sites are in the foothills of the Drakensberg, where the climate is warmer than the highveld but cooler than the lowveld.

The first site, dated to between ~4870BP and ~700BP, was situated on a terrace on the northern side of a low rock shelter in which there are four panels of rock art. It was not possible to say whether the rock art was painted during the mid- or later Holocene, as colouring material was present in all the excavated layers. Stonewalling present at both sites was associated with the last 250 years of hunter-gatherer occupation, and may have served as protection against intruders and predators. The faunal assemblage suggested that during the late Holocene small game hunting was no longer significant and that snaring and fishing formed the main subsistence activity. A high percentage of the tools at one of the sites were used to prepare skins and in woodworking activities.
Archaeology in Mpumalanga 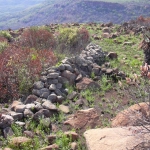